Relocation of factory from Mallusk, Belfast to new facility at Lisburn

Expansion through acquisition of 50% shareholding in Dublin Hire business

Read more
The McAvoy Group continue to expand, with 50% acquisition of a hire business in Dublin.

Queen’s Award for Enterprise within the International Trade Category

Read more
The McAvoy Group are awarded the Queen's Award for Enterprise, within the International Trade Category, recognising the outstanding achievements of the Group.

McAvoy takes part in TV Programme ‘The Next Level’

Read more
Orla Corr, Business Development Director became the first woman to be introduced into the Entrepreneurial Hall of Fame in recognition of her business achievements within The McAvoy Group

Read more
Business Development Director of The McAvoy Group, Orla Corr was named a a finalist at the EY Entrepreneur of the Year Awards

Read more
The McAvoy Group are successful in being appointed on a Rapid Build Framework in the Republic of Ireland, allowing the company to move into new sectors and expanding product offering

Orla Corr received an OBE for services to the Construction Industry

Read more
Orla Corr OBE, McAvoy’s Business Development Director, won two business awards at the Inaugural Women in Business NI Awards 2011. The first was the Award for Entrepreneurship / Innovation and the second was the 2011 WIBNI Outstanding Business Woman of the Year. With this goes the honour of being the first Entrepreneur in Residence at the new Leadership Institute at QUB’s Management School.

Read more
The McAvoy Group was awarded a contract by a global corporation to design, build and supply a turnkey modular building project to accommodate over 1,400 office staff.

Read more
The McAvoy Group secures preferred partner status on a school building framework from the Education Funding Agency (EFA), with £95m worth of school bundles.

McAvoy are finalists at LABC Awards

Read more
The McAvoy Group are selected as a shortlisted finalist at the CEF Construction Excellence Awards, in the GB & ROI Construction award category for Ocean Academy, Poole.

Read more
McAvoy has been shortlisted in three categories within the inaugural Offsite Awards for The Best Hybrid Construction Project, Best Use of Volumetric Technology and Public Sector Project of the Year categories.

Read more
The McAvoy Group has become the first Offsite Modular company to be represented within a new industry-wide leadership group aimed at helping suppliers meet the challenges facing the construction industry over the next five years. The company has confirmed it has joined the leadership group of the newly established Offsite Management School alongside industry heavyweights, Skanska, Laing O’Rourke, Costain, Carillion, United Utilities and Siemens and leading knowledge based organisations including BRE, Build Offsite, Excelin and Total Flow.

Read more
The McAvoy Group has become the first offsite modular construction company in the UK to achieve BRE BIM (Building Information Modelling) Level 2 certification (PAS 1192-2:2013). The certification means McAvoy is able to meet the UK Government’s new BIM Level 2 requirements for centrally procured construction projects that came into effect on 4 April 2016. McAvoy has been an early adopter of BIM and has a long record of using 3D modelling for its private and public sector projects.

Read more
The McAvoy Group became the only company to have been awarded a place on each of the four Lots within the multi-million pound Southern Modular Building Solutions Framework for a range of modular contracts in Southern England. The Framework for the South East, South West and London authorities has a total spend value of up to £600m. The McAvoy Group’s Managing Director, Eugene Lynch, said: “McAvoy’s success on all four Lots of the Southern Modular Building Solutions Framework highlights the breadth and quality of our service offering to clients across a range of sectors, as well as our agility in responding effectively to a variety of client requirements.”

Read more
David Clark, Design Manager at The McAvoy Group has been shortlisted for 'Offsite Professional of the Year' at the 2016 Offsite Construction Awards. The winners are to be announced on 18th October at a reception at The NEC in Birmingham during UK Construction Week.

McAvoy achieves CORE accreditation from Business in the Community

Read more
The McAvoy Group was nominated within the Construction category at the 2016 Irish BIM Innovation Awards for its work at Sythwood School, Woking. David Clark and Hadeel Saadoon from McAvoy were amongst hundreds of representatives from the Irish construction industry who attended the glittering awards’ ceremony at The Gibson Hotel, Dublin. They had earlier presented an outline of the Sythwood School project to a panel of distinguished judges. The Construction Category celebrated the overall contribution that digital tools can make to the successful delivery of a construction or engineering project. 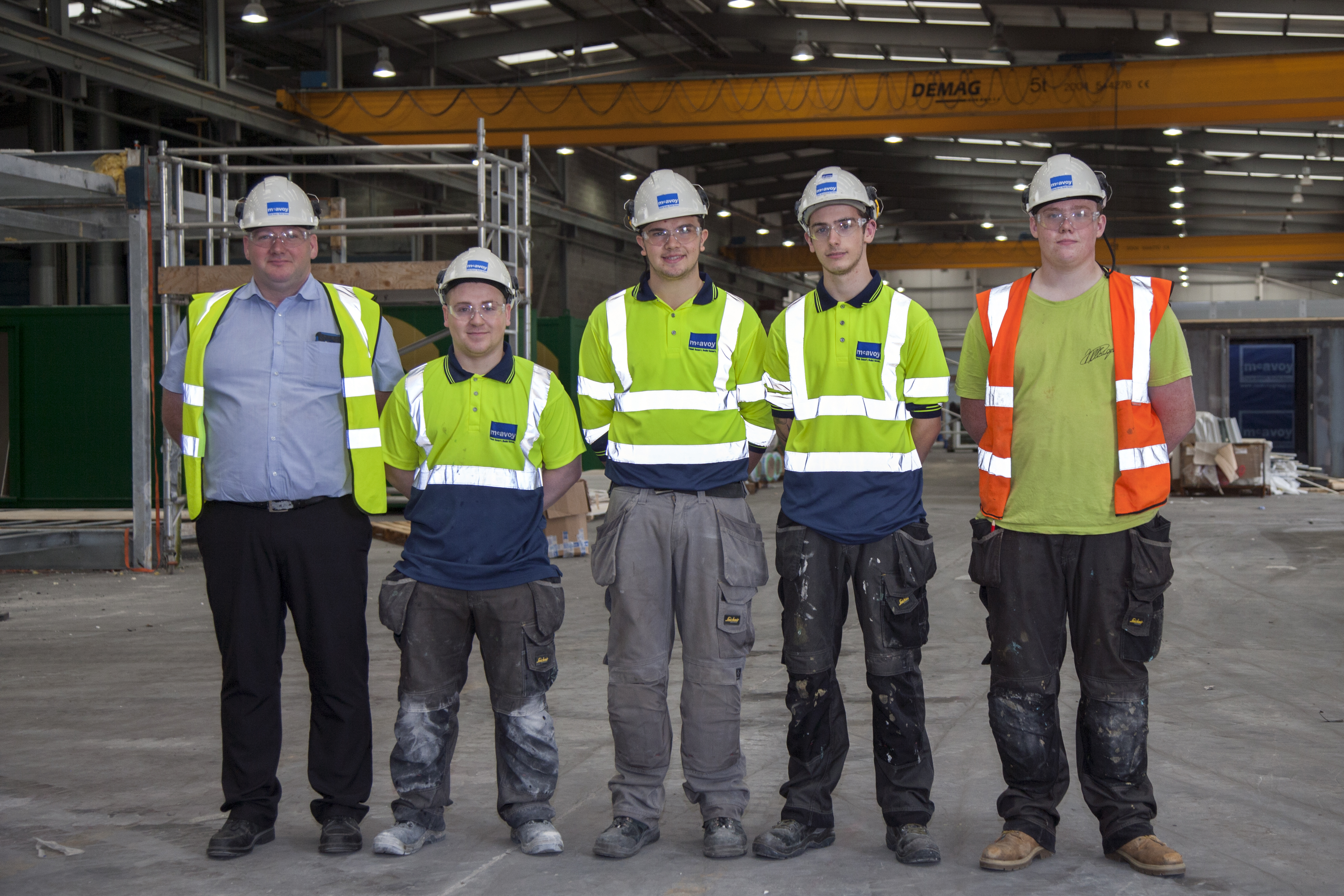 Read more
McAvoy has been awarded an SERC Business Excellence Award for continuing to provide students with invaluable experience in the completion of their Level 2 NVQ in Site Carpentry, following on to Level 3. With McAvoy projects being built offsite in a controlled factory environment, students have been able to gain experience on all aspects of a project, from conception through to completion. Stuart Marshall, who completed his Level 2 NVQ Diploma in Site Carpentry in August 2016 alongside his apprenticeship at McAvoy, has also been awarded Apprentice of the Year at the awards.

Read more
The £20m school, situated at the town’s Stoke Road, is understood to be one of the UK’s largest ever postprimary modular schools. Spanning a massive 8750m2 the building accommodates 1140 pupils across a 2.87 hectares site. The project was commissioned by The Learning Alliance Academy Trust, with the contract being awarded through the Crown Commercial Service (CCS) Framework for Modular Building Systems which is funded through the Education and Skills Funding Agency (ESFA).

Read more
The McAvoy Group wins the award for Best Virtual Reality BIM at the third annual RICS BIM4SME Awards. This is for the design and delivery of a two-storey primary school building for children with special educational needs at West Hill School for Surrey County Council.